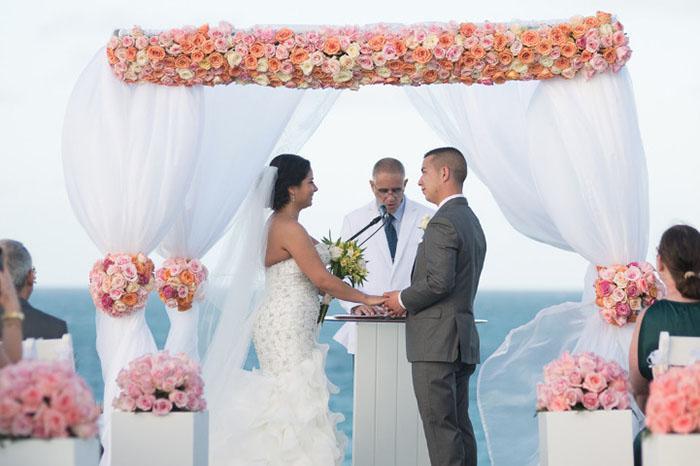 For a relationship that the bride and groom themselves described as strong and passionate, understanding and tolerant, they chose a romantic design for the ceremony, accentuated by the profusion of roses in the gazebo and the path of the bride. Pastel shades and flowers were also the guiding thread for the reception, enhancing the elegance and romanticism of a location that has managed to preserve its original architecture despite the years, a tribute also to the strength of this couple's love.

Roses marking the site for each guest and a wedding cake with delicate patterns provided harmony to the concept which also included a careful selection of lush arrangements in glassware. The wedding table, presiding over dinner, was decorated with a compact arrangement of roses similar to the gazebo, harmonizing the decoration of both spaces.

Arianna and Ben met for the first time in 2003 at a birthday party in Canada, and although at first Arianna did not want to know anything about this guy, let alone dance or accept him back home, a week later they ended up together on a date, from which they came out convinced that they had found the ideal person for the rest of their lives.

A year later Ben gave Arianna his second great love, a cub they named Cuba, as a nostalgic homage to the land of their parents. Since then and over the next ten years Ben and Arianna shared their lives and their trips to Cuba marked by the reunion for Arianna and the discovery of a second home for Ben.

When they decided to marry, what better place than this beautiful land that had come to mean so much for both. They decided to join friends and family and found in the Xanadu Mansion the perfect setting to make their marriage official.